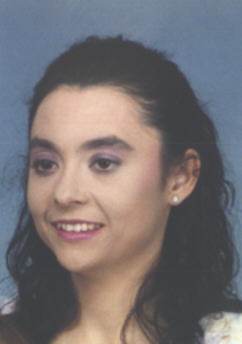 24 year old Cory Rubio was last seen with her former husband, Airman Jesse McGay at Barksdale Air Force Base in Bossier City, Louisiana on the night of January 27th, 1999. Cory called her mother stating that she would be on her way home after she picked up her two daughters. That was the last time her family heard her voice. Cory never made it to the babysitter's home to pick up her children. She'd gone to Barksdale Air Force Base to discuss a custody hearing that was to take place the following day with her ex-husband Jesse. Base security could confirm that Cory entered the base, but said no records are kept for outgoing guests. So it's not known when or if Cory ever made it off the base grounds. Cory's white 1994 Ford Probe was found abandoned at the Stoner Avenue Boat Ramp, on the Red River in Shreveport, Louisiana, just across the Red River from Barksdale Air Force Base in Bossier. Cory is a responsible, devoted mother who would not abandon her children. Cory has black hair, brown eyes, stands 5'2" tall and weighs 105 pounds. She was last seen wearing a dark green shirt and black jeans. Anyone with information on the whereabouts or disappearance of Cory Rubio are urged to call The Shreveport Police Department at the following number - (318) 673-7300

Back to Kristi O'Pry's Home Page