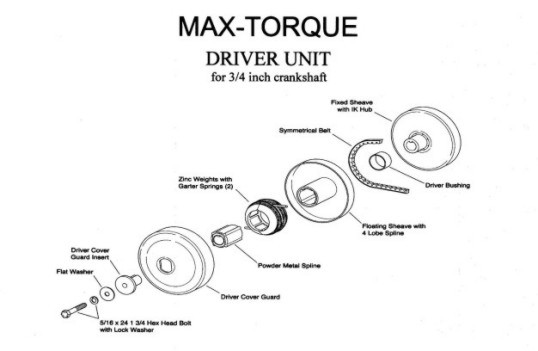 An American Max-Torque Variable Speed Drive System consists of a Driver Clutch, Driven Pulley and a Symmetric V-Type Belt. The Driver Clutch has two 15 degree variable pitch sheaves and mounts on the engine crankshaft. As the RPM's increase, above the idle speed of 1850 RPM, the clutch is activated by centrifugal force. The floating sheave of the driver clutch is forced inward as the RPM's increase. Contact is made with the Belt, forcing it to move upward on the Driver Clutch Sheaves and downward on the Driven Pulley Sheaves. The 7" outer diameter Driven Pulley has two 15 degree variable pitch sheaves that are mounted on the Jackshaft. The Driven Pulley has been Designed to Float on the Jackshaft. It should NOT be Fixed. Once the belt is aligned with the driver, all float with the driver will be towards the engine.

The Symmetric V-Belts used on Max-Torque Torque Converters are angled at 15 degrees on each side, for a combined angle of 30 degrees, to match the sheaves of both the Driver Clutch and the Driven Pulley. 3/4" Top Width (.750 +/- .031). A Standard 5L or B Belt will NOT WORK because they're too narrow at 21/32" (.656) - .100 smaller. The center to center distances are based on a 7" Outer Diameter Driven Pulley, which is the ONLY size Driven Pulley Max Torque manufactures.

At Idle Speed- The driver clutch is disengaged. No tension on the belt. The driven pulley is immobile.

At Low Speed- With acceleration, the driver clutch sheaves begin to close. The tension on the belt moves the driven pulley.

At High Speed- The driver sheaves are closed. The belt has attained maximum height on the driver clutch and traveled the maximum downward distance on the driven pulley.

Your complete unit must be mounted on parallel shafts with a desired center distance no greater than 6 13/16 (6.8125) inches. After it is centered at idle the driven pulley must have at least 3/8" inward float, to properly align with the driver clutch. DO NOT USE UNIT WITHOUT COVERGUARD IN PLACE. 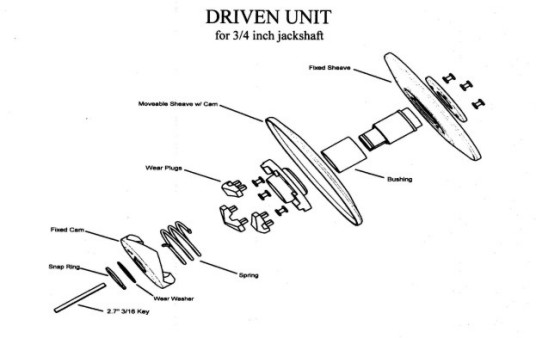 All maintenance must be performed with the engine OFF. For the best results, all work should be performed prior to running the kart.

Maintenance will include proper cleaning and lubrication of the driver and driven bushings. This should be performed at least semi-annually. Weekly inspections of the three wear plugs is recommended before damage occurs to the driven pulley. Replacement of the wear plugs can prevent costly overhaul of the driven unit.

Belts do NOT stretch, they wear out from the sides. Keep the sheaves shiny and use a scotch guard pad or 220 grit sandpaper to get rid of any rust on the sheave to make the belt last longer. Rust will prematurely wear the belt. Once the top of the belt gets below 19/32 (.593) it should be replaced. A loose belt or a narrowed belt will damage the driven unit because the DRIVER will slam into engagement. You will not be getting the top speed from the kart any more and you run into the possibility of the belt getting stuck in the Driven Pulley. All torque converter belts must be cogged on the underside of the belt because they are turning a VERY tight circumference on the DRIVER unit which is only 1.175” in diameter at the powder metal bushing on the driver fixed sheave. -To properly lubricate the driver unit, it must be cleaned first. After disassembly, justwipe out excess dirt with a clean rag. After the driver unit has been cleaned, apply Max-Torque's dry lubrication to the angled lop of the weights, the four lobes of the spline, and the hub of the sheave where the bushing rides. Wipe any excess lubrication off the sheaves. Clean the driven unit at the same time you clean the driver. Use the same dry lubricant on the driven unit, the bushing, the spring, the ramps, and wear plugs. When placing the driven unit back on the jackshaft, only use the 2.7" key provided.

-Upon cleaning the driven unit, if the wear plugs appear worn or missing, they must be replaced. Failure to do this will result in the cam unwinding the spring.

-Keep the belt dry when running. Do NOT get oil or lubrication on the belt or the in-side of the sheaves where belt contact is made or excess slip will occur. Oil/lubrication must be cleaned off prior to using your kart or you will destroy the belt.

-Only use the belt provided, it has been designed to open the driven unit sheaves to the proper dimension for the highest speed range. If your belt shows signs of uneven wear, it may be due to the engine crankshaft and jackshaft not being aligned perfectly parallel.

-Misalignment can cause damage to the chain. The driver unit must always be in neutral to move in reverse. Any backwards movement while your Variable Speed Drive System is engaged may cause damage, such as unwinding the spring in the driven unit, breaking the wear plugs or damaging the cams. This problem is not covered under The Max-Torque Factory Warranty.